This week was a pretty good week, I’m not going to lie:)  We had a mission activity called “Semana en Sus pasos” or “Week in His shoes” where we were supposed to be the most obedient we could, asked to sacrifice something even more, and start and end the week with a fast.  And it helped! Miracles happened and we finally have investigators again!:)
The first I wasn’t there to experience:(  But it’s all good!  His name is Jonathon, and my comp found him when we were on divisions!  And he put the baptisimal date and everything with him!  I’m so proud of him!  (But I didn’t get to see my son’s first baptisimal date:().  He said that he had no idea what to do, but decided to do what we had practiced and it all turned out!  My son is a stud!
The second I was there for:)  And it was pretty great:)  So on the first day of Elder Costa’s mission 5 weeks ago, we contacted a lady named Gabriela who said that we could come back to teach her, but we were never able to find her.  So on Friday we were contacting in the street and we contacted her again!  And she asked us go by her house again!  So that very day we went to her house and found her and it was one of the most spiritual lessons I’ve ever been in.  She accepted everything so well and she felt the spirit of the Restoration super strong!  It was fantastic!  And then we invited her to baptism and she said yes!  And then we talked about attending church and the whole lesson she had told us how much she didn’t want to attend a church, but she said yes to that as well!  Then she told us thast last week an evangelical pastor friend had invited her to her church and she had said “No, because God is looking for me somewhere else”  And then she said “I know that God put you two in my path again for a reason!  He’s looking for me in your church!”  And then in the closing prayer she asked God to help her come to church and to make it to her baptismal date (unfortunatley something happened and she couldn’t come yesterday, but next week there’s still hope!).  It was so fantastic!  Finding people like these is the reason that we do missionary work!  Because their out there!  They just don’t know what they are looking for until we find them!  I love this work!  It’s amazing!
Also, a different kind of miracle.  So Sunday was fast Sunday, and here, we start the fast at lunch on Saturday and end it at lunch on Sunday.  So Saturday night we were trying to figure out what to do because everything fell and we were like, who can we visit that won’t offer us food?  So we decided to visit a member family, but we chose the wrong one.  We got there and they were having a huge asado, and I wanted to die.  Because not only does asado taste good, but it smells super good too.  But we decided not to eat, although it hurt to my very core:)  So Sunday our lunch got cancelled so we were in the pension of the other elders preparing to make pasta when the landlord of the other elders comes up and says, “Come eat with us!”  So we went down and they had asado!  We were blessed the next day not only with lunch, but also with asado!  And it doesn’t end there!  That night we went with the family that we are going to do Skype with to confirm at what times we could be there next week, and they were doing an asado too!  Two asados is one day, all for not breaking my fastSaturday night!  Not only does they Lord bless us spiritually for our sacrifices, but he blesses us temporally as well:)
I hope that you all have a fantastic week!  Share the gospel with somebody!
¡Les quiero un monton!
Elder Trenton Behunin 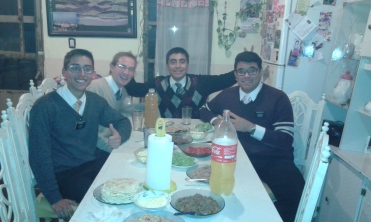 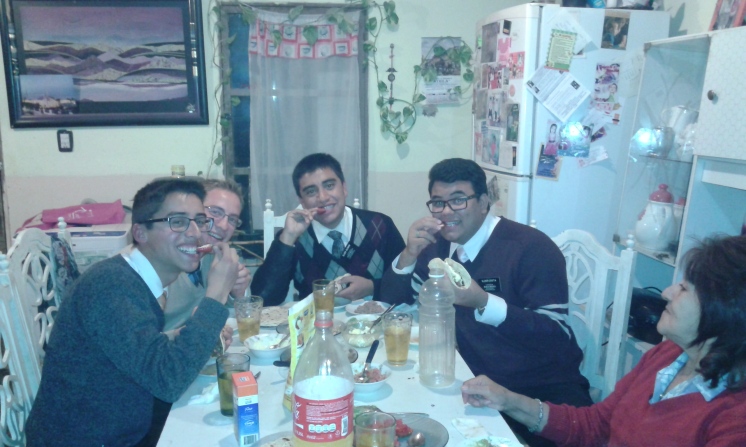 We have to send pictures of our pension’s cleanliness to the mission, so here’s my pension for you guys as well. And yes that is the whole 3′ by 4″ bathroom! It has been interesting.