I hope that you all had a splendid week! This week was pretty good here in Comodoro!  Windy, but that’s normal.  And either it’s not as hot or I’m used to the heat.  Honestly, I think that it’s not as hot:)
The biggest miracle of this week was probably the less actives that came to church this week. We’ve been working a lot with less actives (since the baptism we haven’t had very much work with investigators) and yesterday out of the blue we brought 9 less actives (they were families so that includes their kids) to church yesterday!  That was way cool!  And it just so happened that President Rogers was visiting our ward yesterday as well, which made us look good:)
So this week I received the worst rejection of my life I think (and it wasn’t even due to Valentines Day:)).  So we were contacting one morning without a whole lot of success and we got to this door with two little, grumpy looking dogs in front of it barking at us.  So we went and knocked on the door (we didn’t have to clap like we normally do because there wasn’t a fence in front of the house. So we go up to the door and knock and one of the dogs comes over.  I thought it was going to be friendly, but all of the sudden I here something weird, and I look down and the dog had lifted up it’s leg and was peeing on my foot!  What?  So I kicked it (generally I’m not mean to the dogs, but this one was peeing on my foot) and then we went to the chapel to clean up my shoe.
So I don’t know how many of you have though as dessert as a punishment, but yesterday, that’s what I was thinking.  There are a lot of people that love the missionaries a lot down here, and it’s wonderful because they like to give us food, but sometimes they just give too much:) Yesterday, I was given a huge plate of salad and two huge plates of raviolis for lunch.  It was so good, but I wanted to explode!  Finishing the raviolis.  Then they pulled out the peaches for dessert and oh my goodness, I wanted to die!  And then, as I was finishing the peaches, they were like, “So we’re going to be in the temple for your birthday (on Friday) so we made you the cake for right now.”  I wanted to cry, I was super happy for the cake, but I was sure I was going to die right there on that chair.  But then they smiled and said that they knew that we all were dying from being so full, so they just gave us the cake:) That was definitely a blessing!  I love the members, and love the lunches, and am going to miss them, but yesterday I was sure my life was over from overeating:)
I hope that you all have a fantastic week, and find someone to share the gospel with (or atleast give the missionaries something to eat, just not too much;))!
¡Les quiero!
Elder Trenton Behunin 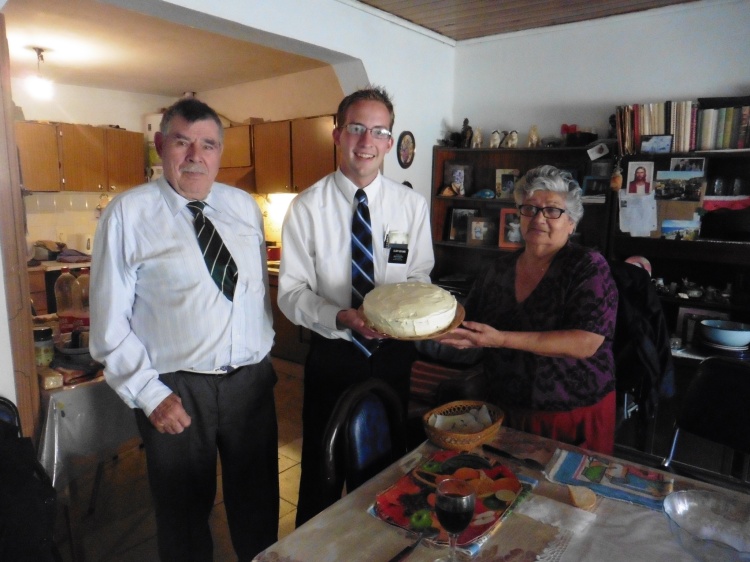 One thought on “Todo bien-to!”