This phrase can mean different things.  Generally, it means that the investigator is progressing super well, but just won’t accept a baptisimal date.  And then there was the case of last Saturday, where the investigator literally was hard to get into the water.
Let’s explain!
Meet Carlos Vilte, 58 years old, and partially paralyzed due to a stroke a couple of years ago. When I got to this area, he basically was the only real investigator that we had.  He had a baptisimal date, but lacked a lot of lessons, so we pushed the date back and taught him everything.  When we pushed the date back, he was super sad, but he understood why.  He didn’t have any problem with attending, he lives like three blocks from the chapel (although it takes 20 minutes for him to get there because of his condition) So we got everything taught, and filled up the font on Saturday, and then got him to the chapel.  Then the first problem we had was the clothes. The only pants that our ward had were absolutely huge, so I brought mine (thankfully) and another elder brought his too (although thankfully).  Both were too small for him though, so we had to use a white rope as a belt for him.  After 30 minutes of trying to get him dressed though, we finally did it! Then we realized that there was no way that the bishop was going to be able to baptize him alone, so I put my white pants on as well (although I was completely unprepared, I only had the white shirt and the garments that I was wearing).  Then we got to the actual baptism, where we found out that, understandably, Carlos is afraid of water, mostly of falling and drowning.  So we had to coax him into the water and tell him over and over again we wouldn’t let him fall.  So after about 5 minutes, we finally got him positioned, said the prayer, and the bishop was about to dunk him, and he said “No, no, no!”  Oh no, what now?  He said he was going to die falling over and that we couldn’t do the baptism anymore.  After the prayer.  So we closed the doors and were trying for a half an hour different ways to get him into the water in a way that he felt comfortable.  Finally, it took my zone leader, Elder Dworshack, to put on the other pants that were there and get in the water and we literally picked him up like a baby and basically baptized ourselves.  It was really cool actually, something I’ll never forget. Then my comp had to go to our pension with a member to get a change of clothes for my zone leader and I.  But no joke I will never forget that day!
All right, fun fact!  As of last Friday, it has officially been a year since I’ve had a gringo comp.  3 months with Elder Murúa (Argentina), 4 months with Elder Escamilla (Mexico), 4 months with Elder Ixcot (Guatamala), and now a month with Elder Romero (Argentina).  And yes, in the last year I’ve only had 4 companions!
Another not so fun fact!  If I’m going to do “6 months of sexy” (that’s what exercise in the last 6 months of the mission is called in my mission, I don’t know about the rest of the world), I have to start tomorrow.  We’ll see:)
Share the gospel this week!
¡Les quiero un monton!
Elder Trenton Behunin

Carlos’ Baptsim. I like this picture, it wasn’t planned but I am totaling the in the spotlight! 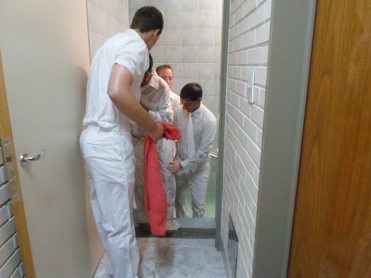 Getting Carlos in and out of the font!