Skip to content
Dear Family and Friends,
Right now it’s 34° outside!  It’s so nice!  I left the pension with my coat only partially zipped up, without gloves or a sweater, and brought shorts and a short sleeve shirt (with a light jacket) to play soccer in!  I’m loving life right now!  Just as long as there’s no wind!  (The wind makes things miserable)
Because this week has been a lot warmer, and there isn’t as much mud.  But as you may have noticed in the pictures, my boots didn’t quite make it and I had to sew them back together.  It was really difficult, so I really hope that it lasts!  I’m not worried about the duct taped part though!:)  Duct tape fixes everything!
We have an investigator with all the attendences that he needs to be baptized, and he’s married, and he wants to go to the temple to be sealed to his wife.  The only hard thing is teaching him because he has a learning disability and it is really hard to help him understand.  So we’ve been teaching like we would teach someone in the primary.  But it is really cool because he is really starting to understand and love it!  And his family that is less active is starting to go back to the church!  Hopefully they keep it up!  He should be getting baptized in two weeks!
So on Wednesday we were out in the morning walking around and noticed we could see the waves of the ocean crashing.  We were like, “What?” because we were three blocks from where the beach starts, and generally it’s another 50 meters to the water.  So we went and looked and the ocean was very angry.  But very angry.  So angry that it was getting up onto the road.  We thought our area was going to flood!  It was so cool!  No joke, we were on an overlook of about 8 feet and a wave nearly reached us!  So we took lots of pictures and video, and while I can’t send the video, you have the pictures, although they don’t do those waves justice!  They were huge!
Have a fantastic week!  Share the gospel with someone!
¡Les quiero un monton!
Elder Trenton Behunin 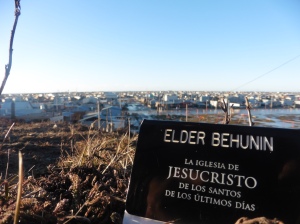 My name plaque over the Austral! 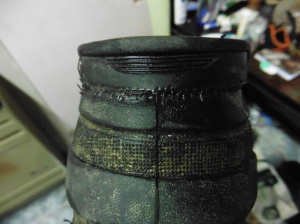 My broken boot and my awesome fix job!

The broken and then fixed sole of my boot! Duct tape fixes everything! 🙂 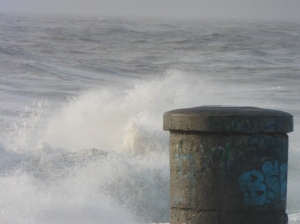 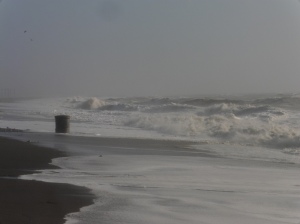 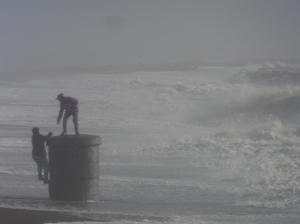 The waves were so huge and intense! To show how big they are look at the random people for comparison! I thought these pictures were so cool!

One thought on “Nice and Toasty 34 degrees!”