This week has been amazing!!!!  So many miracles!  It started off on
Monday.  We were at Walmart buying
our stuff for this week when our investigator, Miguel, called and said
he wanted to be baptized this Saturday!  That was crazy and out of the
blue, because the week before we asked him twice and each time he said
maybe, but not October 25, that’s too soon!  That definitely put a
highlight on that day!  We had a lot to teach him though, so we were a
little bit stressed about that because he doesn’t learn very fast.  So
we go to teach him lesson 4, and he basically already knows all of it,
and the stuff he didn’t know he learned super fast!  It was a miracle!
I could hardly believe my ears as he was talking!  He was explaining
more to us than we were teaching to him!  There was even a point where
we just asked him what the Sacrament was, we didn’t even teach
anything, and he said that it is when we partake of the bread and
water every week which represent the blood and flesh of Christ.  It is
an opportunity for us to repent of the things that we have done wrong
in the past week and promise to try to do better the next week!  And
that we need to prepare for the Sacrament every week by trying to be a
little bit better than we were the previous week!  I could barely
believe my ears!  We asked him who had taught him that, and he pointed
up to the sky!  He taught me that day.  The following Sunday, I
remembered what he said and honestly it was the most spiritual
partakings of the Sacrament that I had ever had!  My investigator
taught me this week!  The baptism was super spiritual, Miguel really
does know with all of his heart that this church is true, it has been
amazing to see him grow!  I had the opportunity to confirm him and
give him the Gift of the Holy Ghost and that was amazing!  I was super
nervous because I struggle giving blessings in English and I’m fluent
in that language, but when I got up there, I felt a peace in my heart,
and just like with in English, words started coming to me, this time
in Spanish!  It was super amazing!  I know that God lives and wants me
to succeed, he helped me that day and will help me on every other day
as well!

We had another miracle this week too.  We were walking in the street
this week and someone called out to us.  We walked back to where he
was and he asked us to come and visit him because he wants to change
his life!  Miracle, that never happens!  So we scheduled an
appointment for Sunday and met with him and his girlfriend and the
Spirit was there like crazy!  They genuinely want to learn more and
will do whatever it takes to change their lives for the better and
have an eternal family!  They were just two of our five new
investigators this week! (This number is crazy for our mission, in my
first four weeks, we had one!)

I know that God has his hand in this work, and that he has for us
people prepared to hear his gospel, we just need to be worthy enough
to find them.  This area is hard, but Elder Flores and I have gotten
out there and contacted and done as much as we could, and now we are
seeing the miracles!  God lives, I know it!

Funny mistake my companion made this week:  we were teaching the Law
of Chastity to Miguel and he was trying to tell him that he can’t have
any sexual relations unless he is married. “Married” is “casado.”
Unfortunately, he said “cansado” which means “tired.”  Whoops!  The
best part is he’s a native speaker!

The Lord lives!  I know it!  This week has been amazing!  God is our guide!

I want to share one of my favorite scriptures from this week’s
personal study, in 1 Nephi 7:16-17.  Notice in Nephi’s prayer that he
is not asking the Lord to remove the bands that are holding him back,
but to grant him the strength to break the.  Oftentimes I, as I’m sure
many of us, have received a trial that I have asked the Lord to take
away.  But if he takes it away, I won’t be any stronger.  We need to
remember that everything happens for a reason, and we won’t receive a
trial that we can’t overcome.  We just need to ask God for the help,
because as it says in Phillipians 4:13, “I can do all things through
Christ which strengtheneth me.” 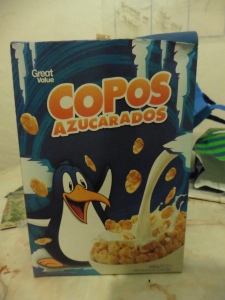 So Trenton thought of his mom (who if you don’t know is obsessed with penguins!) and had to buy this cereal. 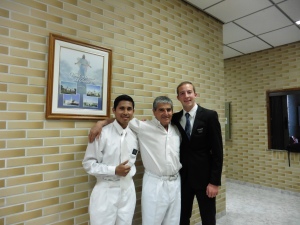 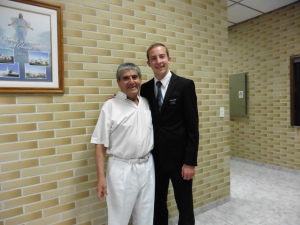 This was such a wonderful surprise to Trenton.